A downloadable game for Windows, macOS, and Linux

"As an experienced paranormal investigator, or ghost hunter if you prefer, I’ve heard my fair share of folklore and can tell you with almost full certainty that most of it is bogus. However, there is always one story out of a hundred that has some credibility."

There are rumors that a demon lurks in Blackhill Cemetery, and that it feasts on the souls of those unlucky enough to encounter it. As a seasoned ghost hunter, you decide to see what all the fuss is about, but this job might actually be more than you can handle.

Game is played with WASD/arrow keys and mouse

Other controls include spacebar and tab

This game was fun as hell! ^_^ If you like anything to do with ghost-hunting or demonology, for sure give it a go. My playthrough of it starts at 8:58

got really freaked out of the demon. Thanks for the game! really had a good time.

The Demon Of Blackhill Cemetery

Here is my video playing it

Not a bad game! A few moments were a little underwhelming, but there were a couple good scares and moments! Overall a great game!

It was a bit of a slow burn, and I may have missed something, but the atmosphere certainly gave me the creeps :P

Nice job! Honestly, it was perfect for a short video :)

Short and sweet, I liked the atmosphere that was built. Audio could have been a little louder as I had trouble hearing the narrator and various sound effects at times. Looking forward to checking out your next project!

Was a super fun game! I loved the theme, environment and the tone. The character didn't take it seriously at first and then towards the end, it become more faced paced. Was a good method of making the players explore to find the randomised locations and cold spots, etc. The demon itself was pretty well done as it melded into the background but also was spoopy and funny (just because of the way it crouched and stood)

Also, I did break the game. If you change what you're holding and at the same time open up the help book thing, it will duplicate the hand and make it stuck on the screen. Sorry about that.

But yeah, a really fun game and definitely worth a play!

Thanks for pointing out that bug, it was actually fixed yesterday afternoon and should no longer happen!

Pretty interesting game. I enjoyed the idea of the game but I think switching between items can seem a bit clunky. I enjoyed the game overall. I will link my gameplay below if you are interested in seeing my reaction.

Good content. It looks nice. I like the idea of searching for ghost activity. However, it says really buggy. Sometimes multiple items would up and once. Other times, I couldn't change anything. For instance, sometimes I couldn't put the camera down and get the flask. It just didn't work. Had to restart the game to get it to work, which broke the flow of the game. I feel the experience would have been much more interesting and enjoyable without the bugs.

Yes that bug has been brought to my attention by a few people, and I finally was able to upload a fixed version today!

hi, big thx for the game. greetings from rosti 😀

really enjoyed this please check out my play through below x

I enjoyed this game, wish it were longer. Check out my gameplay 👇🏼

THIS WAS SO GOOD!! Possibly my best video on my channel lol

we loved this game, we have been obsessed with ghost hunting since phasmophobia!

I like the VO and the look of the level/ghost. I did run into a glitch where I ended up holding multiple items at once and was unable to switch or use the items properly, and ended up having to replay it several times to get the ending.

Thanks for playing! There was an update a few days ago that should have fixed that bug. Did you download it recently and still experience it?

I had downloaded it Tuesday afternoon.

Huh, ok i'll take a look at it and see if I can fix that bug then

Reply
The Lost Chevalier1 year ago(-1)

So, this game was nice, I like it! I would have played a little more with the cementery layout in order to make it feel more like a cementery and less like a ladder to the end. But still, its an awesome game and I love the voice actor!

Pros and cons are down below) Check my vid here (likes and subs are highly appreciated)) thanks :3

1. I think that the game was spooky. It freaked me out the first time I saw the demon and I got very spooked when I saw the demon squatting in front of the mausoleum or whatever these little buildings are called (not-native, sorryyyyyyy).

2. Ghost hunting equipment is cool! I think it's a very cool concept and I see people comparing this game to Phasmophobia in the comments. I guess there can't be too many ghost hunting games) For some reason, it feels super cool to become a ghost hunter for a short gaming session ahah

3. I love the main character. I think it's cool that you gave them a bit more depth revealing their skepticism and disbelief. Also, voice acting helps a lot with the immersion.

1. Well, I think there could be done a lot more to spook the players. For examples if creepy whispers could be sometimes heard from all around or branches cracking as if somebody staps on them. Or even if the main character would sometimes say creepy stuff "It feels like I'm being watched". Or it would be awesome to sometimes see stuff in the corner of the eyes (for a split second see a shadow upon turning or something like that). These details would definitely raise the creepy factor of the game!

2. I didn't like that there the player could see their shadow. I mean, shadow is nice but NOT when you are playing as a flying hand with equipment. Makes you wondering - maybe you are the ghost yourself? (Btw I just got an amazing idea that I'm giving you out for free ahah: what if the main character would actually be the ghost this whole time and at the end they couldn't escape (because they are a ghost stuck in the graveyard) so they would start wondering what's happening and then they would see their dead body. It would turn out that they were investigating the graveyard and killed by a demon few days earlieer). Or something like that. Would be awesome!

3. The ending is bland. I mean, come on. You hear demons intimidating you, collect ghost pee and take photos of weird entities. I guess the main character would know that the ghosts are real. Why going in so far into the graveyard. And why is it so easy to escape? Kinda disappointing. I wish there would be more to the game. Feel free to get some inspiration from the idea above, if you want to)
I think a good example of an indie horror ghost-hunting hame with an interesting plot would be Paranormal Entities (https://al-heck.itch.io/paranormal-entities). Maybe this game could inspire you as well!

I rate the game 4/5 as there is lots of room for improvement. It was cool and I enjoyed playing the game a lot but it was  still a bit predicatble story-wise. Some unexpected twist would make this game instantly a lot better!

Hope my feedback was useful!

*btw I also played your other game a while ago (New Resident) and I want to say that your games have improved a lot! Can't wait to see more!

Thank you for the in-depth feedback! Really helps us out. I agree that raising the stakes throughout the game would make it much scarier and perhaps a more immersive experience, but unfortunately our time constraints limited us (as is often the case). Appreciate you following our games!

Good game! You may just need to put the danger factor a little higher. :)

An interesting game. Had fun testing it.

check this game out if ya want keep doing you developers

Cool game ran a little slow on my pc but hey, thanks :)

This game is good

I was wondering how long your game is roughly? I am considering doing a video on my channel about this.

Sure! It usually takes somewhere between 7-15 minutes to complete

Awesome! I can do a video with that amount of time. I can't wait to play it!

hey just wanted to ask, are you in need of some spooky ambient music for dirt cheap for this game?

Sorry, we're currently not looking to add music at the moment

np thanks for the reply

Absolutely loved it! It is not what it seems to be! haha! If you watch my vid till the end you'll understand what I'm talking about... Good good job! Wanna see more from you, guys.

Thanks for playing! Glad you liked it!

Thanks for releasing for linux! I really like it, nice work!

No problem! I like being able to support more than Windows, so I always try to make the games playable on all operating systems

This really reminded me of phasmophobia and it did a pretty good job of making a different spin on it. I didn't say this in the video but the voice acting was very good for a small horror game, keep up the great work bro!

Thanks for playing, glad you liked the voice acting!

This was great! I loved the ghost hunting mechanics in here! I did encounter a bug where two of my tools would come up at the same time, which prevented me from progressing and I had to restart, but other than that, this was a very enjoyable experience!

Thanks for playing, and for pointing that bug out! I recently uploaded a version of the game that fixed it, so it shouldn't be an issue anymore

Glad you liked it!

This was a treat to play I drew comparisons to phasmophobia too. anyway nothing at all bad about the game it made me jittery and second guessing, very well done I hope to see more from you soon.

Glad you liked it!

Despite being buggy and lacking music, this game was SUPER spooky! I loved it! You could go so far with this concept imo

Thanks for playing! I saw you found a bug with the hands in your video, so I'll try pushing a fix for that ASAP. 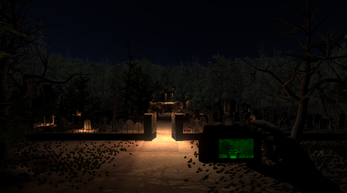 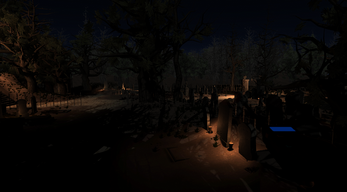