A downloadable game for Windows, macOS, and Linux

A continuation of the story in The New Resident that can be played as a standalone.

All evidence points to the CEO of ManneCorp as the main cause of the missing people. You try to convince your fellow policemen, but aren't able to secure a warrant to search his house. Instead, you take matters into your own hands. However, it seems like the house isn't as welcoming to your presence as you'd like.

WASD or arrow keys to move

This is a game made for the Haunted PS1 Summer of Screams jam.

This game held up to the fun/scares of the prequel :D Not only was there a part like the first game, there were several new tasks added and new parts to the story. I really enjoyed playing ^_^

My video on The Lost Residents.

Played it, got lost at the little dolls rooms but managed to go through... Not that scary but plot wise got more rich

Why thank you! We'll keep that in mind.

Reply
Lucifer1 year ago
I did play the first game and it was great. I personally think that this is both a step in the right direction and also backwards.

(Video all the way down below if anyone's interested!)

I personally really liked the previous game as it had one solid gameplay and story mechanic and it delved into it in a short but deep manner.

Now in this game, I think you nailed the environment both in the house and also in the little kids' doll room(s). It was perfectly scary, suspenseful and had a great atmosphere and genuinely kept me on edge. It was a dark, gritty and an area where the player kept looking behind them to make sure something wasn't happening.

That being said, the environment lost its scariness in a few minutes as nothing really happens in the house at all. I would suggest, moving the mannequins up from the basement to the main floor of the house. Maybe keep a few there so it is scary when the player goes down there, but moving them up into the main floor would give the players a reason to use the main flash mechanic of the game as well as keep a lookout while they are running around to each door.

The doll area I thought was great. Though it wasn't as scary as the doll took their time to get towards the player and also the way to get out of the area wasn't very specific; the player has to realise that they have to touch the doll in the middle of the table after they've gone through a few loops and nothing happens.

The puzzle was interesting and I think was easy yet rewarding to figure out as the player has to go through a mannequin filled basement.

The two things where I felt that the game was really lacking were one; the empty hallways that the player has to go through. Nothing happens there and it's completely random and I felt like it didn't match the rest of the game. That along with the maze with the floating blue orbs, while fun, I felt like were mismatched with the game and seemed really random.

What made the first game really great were the use of sounds when the mannewuins came close to the players and they were really fast and always around the players as well, which increased the sense of danger tenfold. The reason why it was a good and scary game was because it had a singular focus on the mannequins, while in this game, you've tried to add multiple things and the game is stretched out amongst it all.

And I think that there was missed potential with the wife of the dude who made the sentient mannequins; maybe make it reassemble itself and follow the player around. You could add to the story of how it doesn't try to kill the player, but tries to get in their view looking for help or something like that.

And speaking of the mannequins themselves; the switch to demonic rituals was also out of place? I felt at least. The first game introduced them as something made by a dude who was into science, and this sort of retcons that? Not saying it's a bad thing, but making it into a scientific thing might have been interesting and a compelling story.

Now I say all of the above in good faith and as suggestion only. I do like the games you've done and it hass excellent quality and one cans ee the love, sweat, blood and tears you've poured into them.

So wanting to end on a good note, I will say that the way you pace the story (other than the maze and random empty corridor) was really well done and the voice acting was great as well! The house part was really spooky and would definitely love to see more of this unfold as it seems to be a great story so far.

Keep up the great work and good luck for your future projects!

First, thank you so much for the in-depth feedback. I really appreciate it! You make a lot of very good points about the game, and some of it is stuff we realized right as the deadline for the jam was approaching. There was more we wish we could've added and improved, but wanted to deliver something by the deadline.

I like a lot of the points and ideas you brought up. You're definitely right about the story not being super cohesive, and it's something we should've hammered out properly before writing the outline. I personally have no plans on continuing this story, but I am working on developing another spooky game at the moment. (keep an eye out for it at the end of the month if you're interested!)

I'm personally taking a lot of the feedback people gave for this game and carrying it with me as I plan out future games. I'm glad you still enjoyed parts of it in the end, and I really appreciate getting such great feedback! Thank you!

Thank you for the feedback! It was much appreciated.

Nice improvement on the previous game. Great voice acting and a nice selection of different things going on here.

I played an older version of this game a while back in my 3 scary games video and it was TERRYFYING! This gameplay doesn't disappoint. The voice acting was great. Keep up the good work guys!

Glad you enjoyed it! Thank you for the feedback.

bruh... if there was an inventory I'd have already finished this game, but I don't remember what was written on the note in the basement. I closed it fast as there were mannequins around and I wanted to get out... I was not in the mood to try all the 10000 codes.

Better than The New Resident! Great voice acting and a great atmosphere.

Thank you so much! Means a lot and glad you enjoyed.

Great atmosphere, creepy vibes, puzzle elements and the thing I  really liked was the voice acting which you rarely see on itch.

As a writer and one of the voice actors, that means a lot. Thank you for playing and glad you enjoyed!

I really enjoyed the game. As many have said, the voice acting was great. I thought the pacing was nicely done. The atmosphere in the house was definitely felt. Creepy vibes everywhere haha. Good stuff! I made a vid as well! Can't wait to see what else you are making!

Thanks for playing! Glad you enjoyed our work.

I really enjoyed the game!
It felt a little empty without a little music (but I added my own in post), but that’s not the end of the world. I didn’t play the game before this, but it didn’t detriment my experience with this game! It had some simple but still effective set pieces, and made me jump a couple of times!
Great work, keep it up!

Thanks for playing! We wanted to focus more on finishing the main components of the game, so unfortunately some of the sound design had to be sacrificed in order to finish on time. Glad you enjoyed it regardless!

Thank you for playing!

Thank you for playing!

Having not played the first game, I can say that I really enjoyed this. I adore the visual style and, finally, a smaller game that’s voiced! No matter how good a game is, relying on telling its story through notes is dated, so it’s nice to see a game where the characters are voiced.

The living dolls and basement were the scariest moments for me, but I felt like the maze in particular was out of place. But then, I don’t like mazes to begin with, so that could just be preference.

I do think there should be some sort of ending; I feel like the game is missing its sense of closure. But overall, I enjoyed my time with The Lost Residents.

I'm happy to hear you enjoyed the game & the voice acting!

The maze does seem unpopular with most people, so I doubt we'll make a game with one in the future. We did include it in this game as a story element, but it probably didn't come across to others the way we intended.

We did notice the part you mean about closure after publishing. It's definitely something we'll keep in mind in the future to avoid a similar situation.

Thanks for playing and for all the great feedback!

Thank you for the feedback!

Great sequel here i enjoyed this but maze needs a bit of work, apart from that i loved it!

Thanks for playing! What do you think could help improve the maze?

Ok, good to know. Thanks!

Glad you played it! And thanks for the feedback!

What a strange game. I liked it. I thought the maze didnt really fit but the game was fun.

Yeah it seems like the maze part of the game confuses everyone. We definitely should've included a more solid explanation for why it was included. Glad you still liked it though!

Thanks for the feedback!

It was good untill you made me waste time inside a maze, when is a maze ever a good choice for gameplay? bad choice

Sorry you feel that way. It made sense to us when we were planning the game, but we definitely could have put more thought into it.

yea that is just my opinion, never tried a maze that was fun.

Well I just uploaded a new version with a map for the last stage, so if you ever decide to replay it, hopefully it'll help.

thanks! you were actually really close to finishing - it's 3 items not 6. glad you enjoyed the rest of it at least! 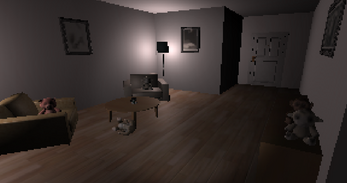 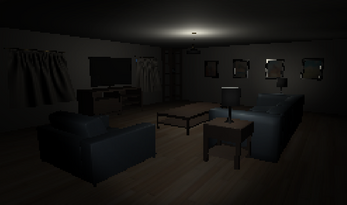 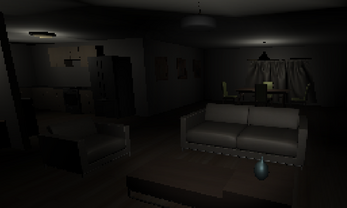